To clarify, some Christians have taken the view that God's story is somehow their story and that the cross is all about them, and for them. Let us be certain that we are mere participants in God's story. Some might say God needed a relationship with us; others on a different extreme have twisted God's love as the motivation to be about them somehow...

So let's be clear: the cross and the mystery of his will were "to the praise of his glory" (Eph 1:11). Or to be even more exact, scripture says, "But God, being rich in mercy, because of the great love with which he loved us, even when we were dead in our trespasses, made us alive together with Christ--by grace you have been saved--and raised us up with him and seated us with him in the heavenly places in Christ Jesus, SO THAT in the ages to come he might show the immeasurable riches of his grace in kindness toward us in Christ Jesus" (Eph 2:4-7).

Everything about the cross and God's story should point to his grace and love and glory. If it was "for us," it was only in the most undeserved way, as we were dead in sin and he made us alive! We've all read "by grace...through faith." But let's not forget the part that reads "and this is not your own doing; it's the gift of God...so that no one may boast" (Eph 2:8-9).

With the right perspective of God's story, we can begin to do that which he desires, that which he has given us the authority to do: "For we are His workmanship, created in Christ Jesus, for good works, which he prepared beforehand that we should walk in them" (Eph 2:10). Post-salvation is not about waiting til we reach our mansion in the sky. It's about letting Jesus sanctify his bride--doing everything he can to conform us to his image is his desire. So when it says we are God's workmanship, created in Christ Jesus, it's talking about our re-birth--our new man, brought to maturity through sanctification and the washing of the word. That new man is now ready to do God's work, his will, on earth.

The bride of Christ is sleeping and unprepared. We've not let our bridegroom sanctify us, and we're not doing the works that he asked. In fact, we hardly look like Jesus at all. We think "it's too hard; I'm too sinful," and in our laziness, we fail to bring the kingdom on earth. We fail to do what we've been given authority to do. We fail to walk in the plans that have already been laid out for us.

Do we not believe in the power of Jesus? Do we not believe that we've been given the same power? (Eph 1:19-23) Do we not understand our inheritance? The seal of the Holy Spirit? (Eph 1:13-19) Or do we not grasp the riches of grace lavished upon us, undeservedly? The great love that points to the glory of God in his redeeming will....

We must let our bridegroom renew our minds from what we know. We need to be washed with his word. Oh that he would begin to sanctify his bride... Oh that she would let him... and that we would begin to walk in his purpose for us here.
Posted by Laura C. Brandenburg at 10:16 AM 1 comment:

God's love for us is so evident in his redeeming story that he created. His heart from the beginning was to be in relationship with his creation. When he created Adam and Eve, he had the purest relationship with them. They spent their days together in the garden.

But God's love is not forced to be reciprocated. It never has been. He created us to respond to him, but we have the freedom to choose. And so, Adam and Eve chose to sin. They chose to do so because they were allowed to rebel. Thus, sin entered the world.

But God's love is so immeasurable and everlasting. And he never gave up on his creation. So, he created a way to restore the relationship again. He sent his son to be the ultimate sacrifice for our sins, to bridge the gap once and for all between us and God. The cross speaks of his grace and mercy on our sins, but the greater purpose was motivated by love--his love that wants a relationship with us, as pure and unadulterated as what he had with Adam and Eve in the garden.

But there is this idea that this "relationship" won't exist until heaven. That we're just hanging out here on earth, doing the best we can, despite ourselves, until that glorious day when we'll all fly away.

We are a body of believers no better than the sleeping virgins who weren't ready when the bridegroom came. In Ephesians 5:25-27, Paul writes, "Husbands, love your wives, as Christ loved the Church and gave himself up for her, that he might sanctify her, having cleansed her by the washing of water with the word, so that he might present the church to himself in splendor, without spot or wrinkle or any such thing, that she might be holy and without blemish." Do you think God expects the Church to be holy and without blemish after Jesus returns? Absolutely not! This is clearly about Jesus' heart for his bride, for what he wants to see her look like now: sanctified, cleaned through the word, holy, blameless.

The process of sanctification is like the process of refinement--maybe testing and trials; life will feel heated, but God is shaping you, purifying you, making you holy and set apart.

In Ephesians 1, we're told that we've been blessed with every blessing in heavenly places. And again, we see the sovereignty of the God--who knew his plan from before time, that he would bring restoration to us. It was according to his will that we are accepted in the beloved, that we are redeemed and forgiven. In verse 9, it says that the mystery of his will was revealed--that mystery being his purpose through Christ to "united all things in him, thing in heaven and things on earth."

So we see that the redemption and restoration of all things to himself was not only for eternity. It was for right now. It was for the relationship that God desired to have with his creation. And it was for the sanctification of us as a body, as a bride.

A Lesson in Imitation

Verses one and two give us instruction on how we are to walk as Christians. Paul begins the chapter with two commands:

While these seem overwhelming at times, notice the way in which Paul presented them--both as behaviors modeled to us. In verse one, he reminds us that we are beloved children of God. Often, children pick up their parents mannerisms just by being in the same house with them. My mom and I haven't lived in the same house for almost ten years, and yet when we're together, I laugh at how much I already act like her. Paul is evoking the same natural reaction here. As children of God, we ought to act like God.

The second command, to walk in love, is also a modeled behavior for us. He tells us that we're to love others with the same love that we've been shown. If ever there was a perfect model for love or a perfect reminder of what love looks like--it's Jesus at the cross; it's his sacrifice for our sins; it's giving himself in order to give us a relationship with God again. Paul is reminding us that we've already been modeled the best behavior of love, and we've been loved with an everlasting love, despite our undeservedness. Therefore, we ought to know how to walk in love, as Christ did, because we have the perfect reminder of love living inside us.

I think the "catch" is that to really imitate someone, you have to know them. Not just on the outside, but from the inside. You have to know what they are like, how they move, what they would do in a given situation, how they respond to adversity and success. You have to know their heart. And you can't know God without having an intimate relationship with Him. I believe the same is true for modeling Christ's love. When you fully experience the fullness of Christ's love and sacrifice, then it becomes an outward response and expression to others. You begin to walk humbly, knowing the gift you've been given, and you walk with grace because of His grace toward you. If you only know Jesus' love in part, or through logic, or just as facts of salvation, you'll never be able to effectively respond to Him or to others in love. Modeling Chris's love, as Paul commands here, is a learned behavior, developed from a revelation of who Jesus is and how much He loves you. Only with that hidden in our hearts can we take the first steps of walking in love.
Posted by Laura C. Brandenburg at 11:45 AM 1 comment:

Hal and I celebrated our one-year anniversary last weekend. This week has been crazy (my last week of summer school), but I wanted to post pictures from our trip. We went to Dallas Friday night and stayed through Sunday. 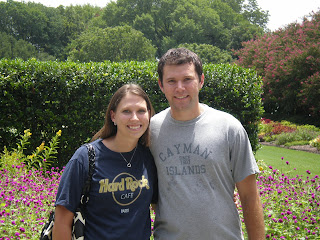 During the day on Saturday, we went to the Dallas Arboretum. It was amazing! Kind of humid and sticky, but the plants and flowers were so beautiful. Hal really gets into landscaping stuff, so we had a great time trying to go around a guess the names of trees and plants. :) Plus, we got some ideas for our own house... 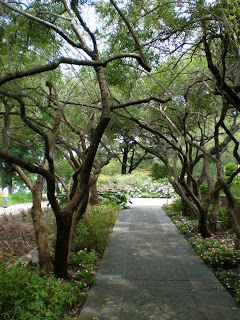 I thought this looked so peaceful... 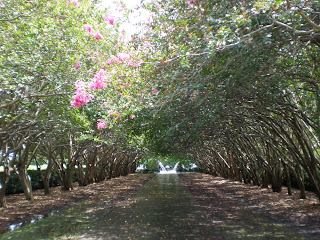 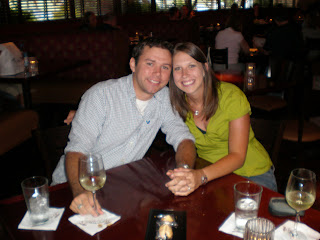 For dinner on Saturday, we went to PF Chang's. Yeah for lettuce wraps!! :) And afterwards, we went to see The Proposal.

Sunday was our official anniversary day. I can't believe it's been a year already. It seems like it went so fast. We sat down Sunday night and made a list of our favorite memories from the year. I was overwhelmed by the Lord's goodness as we shared stories and reminded each other of fun dates and even just nights that weren't planned, but ended up being so special for us. I am so blessed to be married to him, and I know I tell God that all the time, but I think remembering MY blessing is so essential. This year hasn't always been easy; we've faced trials in our marriage, but we have grown a lot too. And I think with every trial we face, we became stronger because we determined to stick through anything together, not separated! I know we will always be tested, and certainly it's Satan's chief desire to drive a wedge between us, but days like Sunday, days when we remember how much fun we have, how much we love each other and how special our marriage is, are encouraging to me and give me confidence that God will always sustain us.

It has been a good year. God has been more than faithful to us. He has taught us to trust Him with our hearts, with our lives, and with everything we own. He continues to teach us how to love and serve each other, and what becoming "one" looks like. I look forward to many more years with my wonderful, wonderful blessing!
Posted by Laura C. Brandenburg at 1:43 PM 2 comments: