Seeing as HE Sees

This is one of my favorite parables, and as I continue with the #LentChallenge, I'm still thinking about Luke 15 because, in various seasons, I have been the lost daughter and the jealous daughter. This is, in most Bibles, the parable of the lost son, but like the two parables in Luke 15 that precede it (the lost sheep and the lost coin), I feel this parable says far more about the Father's heart than that which was lost.

1) Sometimes our Father initiates the search for us, and sometimes, He is waiting for our return, but always, He meets us; always, He is filled with compassion.

This view of our Father--especially depending on how you view your earthly mother and father--is not normal, if normal is defined by earthly standards. A child who rebels, who is wasteful, who squanders, who avoids, who willfully and intentionally goes his own way: that, by any parenting standard, is cause for discipline and reproach.

The response we might expect is anger, silence, crossed arms, a tapping foot, and the words we fear most, "Son, I'm disappointed."

But not our Heavenly Father: "While he was still a great ways off, the father saw him and had compassion and ran and fell on his neck and kissed him."

Even when we are in the midst of bad choices, even when we are ashamed and self-loathing, even before we open our mouths to repent, our father sees, and has compassion, and runs to us, and falls on us, and kisses us.

I'm not downplaying sin, rebellion, or repentance, but too often, our worldly view gets crossed with our spiritual view, and we forget that it's the Lord's kindness, His mercy, His love, that leads us to repentance.

It's about Him, and His heart, and His compassion.

He meets us. He pursues us.

2) Even in our sin, He still desires to reaffirm us as sons and daughters, to confirm in us how HE sees us.

The jealous one--ever been her? When you're just serving and obeying and doing all that your Dad asks you to do, but yet someone else gets acknowledged, gets rewarded, gets that blessing you really feel you deserve?

What does the Father do? He pursues: "But he was angry and would not go in. Therefore, his father came out and pleaded with him."

So much could be said about that one sentence. He didn't scold. He didn't tell him to grow up, to be self-less, to be mature, or to get over it.

He says, "Son, you are always with me, and all that I have is yours."

He calls us by name; He calls us HIS, even in the midst of our jealous fit.

He offers the promise of His presence. We are with Him. He is with us.

He offers the promise of sufficiency. "All I have is yours." You have enough because I am enough.

Grace, that unmerited, unearned favor. Grace, that supernatural power and ability. Grace, His total and utter sufficiency accomplished in me by faith because of the finished work of the cross.

Because He is enough, I am enough in Him.

Because He is sufficient, I am lacking nothing in Him.

Our Father wants to know us, and more than that, He wants to be known by us: that we would really see His heart, not the reaction we expect to find, not expecting the punishment we deserve, but with opened eyes to see all that He's done, out of His great love and grace and mercy.

And when we believe--when we put our faith in what the cross accomplished, the finished work of Jesus Christ--then we are not only transformed from death to life, from lost to found, but with unveiled eyes, we get to behold Him--to really see Him, our Heavenly Father.

He runs to us. He meets us. He pleads with us. And above all, He wants us to see ourselves how He sees us.

Email ThisBlogThis!Share to TwitterShare to FacebookShare to Pinterest
Labels: God's goodness, God's love, God's sufficiency, grace, Lent, lent challenge, the cross, who I am in Christ

Desiring Mercy and Not Sacrifice

The Pharisees couldn’t get what Jesus was saying—first to “go and learn” and later “if only you had known.” With all their knowledge of scripture, with all their rules, with all their duty and obedience, and with—in their mind—their righteousness, they could not understand this truth. Jesus’ words did not compute with their tradition.

Sometimes, if we’re not careful, we can have the same tendency to desire sacrifice more than mercy. What does this mean? As I’ve said elsewhere, we are bent on works because it’s more natural. It’s more natural to do than to be.

As long as I’ve been saved, I’ve loved the Word of God. I’m highly analytical and can spend hours reading scripture and commentary and translations and the original Greek or Hebrew meanings. But, as Paul tells us in 1 Corinthians 8:1, “knowledge puffs up, but love edifies.”

Knowledge without mercy is a dangerous state.

Here Jesus is quoting Hosea 6:6. The full verse is this: “For I desire mercy and not sacrifice, the knowledge of God more than burnt offerings.”

The knowledge of God is not mutually exclusive to mercy. And while He desires mercy not sacrifice, He desires knowledge more than burnt offerings. Under the Old Testament covenant, God is not negating or replacing what must be done for atonement. We know from Romans 3 that in His forbearance, He passed over their sins, yes, but their account was not settled.

So why does Jesus not quote—in both places here—the full verse from Hosea? Is it because knowledge of God is no longer important? Of course not. The problem is the Pharisees had all the knowledge in the world.

But under the new covenant, we get to know God in a different way. Because of the finished work of the cross, we have a mediator, who is Jesus, and we have the Holy Spirit. And that revelation—when we believe in what the cross accomplished—that changes how we know God. We, with unveiled faces, get to behold Him. And it transforms us.

I’m doing the 40 day reading challenge, reading through the New Testament for 40 days of Lent, but my heart must be bent on loving God and discovering Him in His Word. When it becomes doing or duty or an item to be checked off, then I’ve lost sight of what it means to desire mercy and not sacrifice.

Lent: Not Giving Up but Giving More

Lent is about giving up, about sacrifice—and as one who tends to love duty, as one who craves to do lists and tasks to obey, I secretly love self-discipline and the rewarded feeling at the end of 40 days when I've accomplished my "task," whatever it is I've chosen to give up: “Yep, I still got it.”

This year, as many of my friends begin thinking of what to fast, what to give up, I feel God gently whispering: don’t give up, give more—more of your time, more of your energy, more of yourself to me and to others.
Don’t give up TV or soft drinks, give up your life for me.

If Lent is about preparing our hearts for Easter, about reflecting on the great exchange: my guilt, my sins, my shame—my ashes for His beauty, then may the next 40 days, for me, be about reflecting on Him: on who He is and what He did and who I get to be when I’m hidden in Christ, when I’m made righteous, when the work of the cross is finished—really finished—and I get to be made whole, complete, perfect, lacking nothing.

And if I’m to give anything these 40 days, let me give of myself fully. 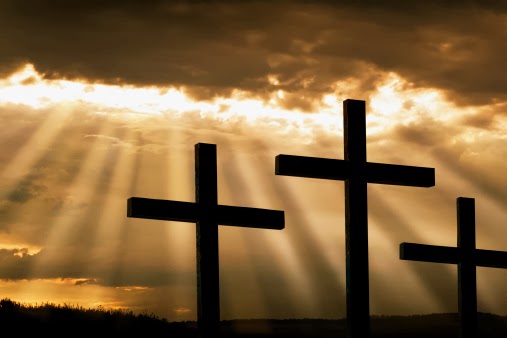 I’ve read some blogs today promoting Margret Feinberg’s 40 day reading challenge, and although (if I’m honest), I get excited when I see little check boxes (That feels like a “to do” list for me to accomplish! Yes!), I have decided to focus these 40 days on the New Testament, as Feinberg encourages—not as something to do, but something to reflect: the story of the cross, of redemption, of the great exchange.

If you’re interested in joining me, you can read more here or print the reading plan here.

May the challenge for me—and perhaps for you, too—not be about legalism or about what I can accomplish with the right motivation and all the wrong motives; may these 40 days be about pouring out all of me and pouring in more of Him.
Posted by Laura C. Brandenburg at 1:53 PM 1 comment:

Email ThisBlogThis!Share to TwitterShare to FacebookShare to Pinterest
Labels: Lent, redemption, reflection, righteousness, sanctification, the cross, who I am in Christ
Newer Posts Older Posts Home
Subscribe to: Posts (Atom)