Do you have a TBR pile? You know, the books 'to-be-read'? These days, my list seems to be growing faster than I'm reading, and it's been a while since I've shared some of the fiction books I'm looking forward to reading when I finish the semester.

Here are a few at the top of my TBR Pile from books out in the last year(ish) that I want to catch up on soon. I've provided the back-cover copy from the publisher.

1. The Nature of Fragile Things by Susan Meissner.

April 18, 1906: A massive earthquake rocks San Francisco just before daybreak, igniting a devouring inferno. Lives are lost, lives are shattered, but some rise from the ashes forever changed.

Sophie Whalen is a young Irish immigrant so desperate to get out of a New York tenement that she answers a mail-order bride ad and agrees to marry a man she knows nothing about. San Francisco widower Martin Hocking proves to be as aloof as he is mesmerizingly handsome. Sophie quickly develops deep affection for Kat, Martin's silent five-year-old daughter, but Martin's odd behavior leaves her with the uneasy feeling that something about her newfound situation isn't right.Then one early-spring evening, a stranger at the door sets in motion a transforming chain of events. Sophie discovers hidden ties to two other women. The first, pretty and pregnant, is standing on her doorstep. The second is hundreds of miles away in the American Southwest, grieving the loss of everything she once loved.The fates of these three women intertwine on the eve of the devastating earthquake, thrusting them onto a perilous journey that will test their resiliency and resolve and, ultimately, their belief that love can overcome fear.From the acclaimed author of The Last Year of the War and As Bright as Heaven comes a gripping novel about the bonds of friendship and mother love, and the power of female solidarity. 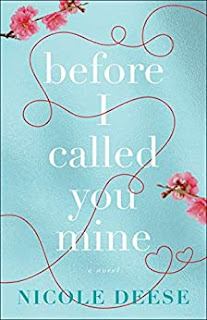 2. Before I Called You Mine by Nicole Deese

Lauren Bailey may be a romantic at heart, but after a decade of matchmaking schemes gone wrong, there's only one match she's committed to now--the one that will make her a mother. Lauren is a dedicated first-grade teacher in Idaho, and her love for children has led her to the path of international adoption. To satisfy her adoption agency's requirements, she gladly agreed to remain single for the foreseeable future; however, just as her long wait comes to an end, Lauren is blindsided by a complication she never saw coming: Joshua Avery.Joshua may be a substitute teacher by day, but Lauren finds his passion for creating educational technology as fascinating as his antics in the classroom. Though she does her best to downplay the undeniable connection between them, his relentless pursuit of her heart puts her commitment to stay unattached to the test and causes her once-firm conviction to waver.With an impossible decision looming, Lauren might very well find herself choosing between the two deepest desires of her heart . . . even if saying yes to one means letting go of the other. 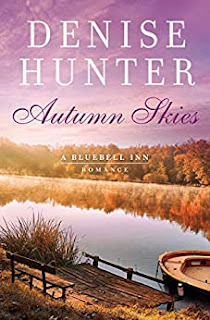 From the bestselling author of The Convenient Groom and A December Bride (now beloved Hallmark Original movies) comes the third and final novel in the Bluebell Inn series!

When a mysterious man turns up at Grace’s family-run inn, it’s instant attraction. But she’s already got a lot on her plate: running the Bluebell Inn, getting Blue Ridge Outfitters off the ground, and coping with a childhood event she’d thought was long past.

A gunshot wound has resurrected the past for secret service agent Wyatt Jennings, and a mandatory leave of absence lands him in Bluebell, North Carolina. There he must try and come to grips with the crisis that altered his life forever.

Grace needs experience for her new outfitters business, so when Wyatt needs a mountain guide, she’s more than happy to step up to the plate. As their journey progresses, Grace soon has an elusive Wyatt opening up, and Wyatt is unwittingly drawn to Grace’s fresh outlook and sense of humor.

There’s no doubt the two have formed a special bond, but will Wyatt’s secrets bring Grace’s world crashing down? Or will those secrets end up healing them both?

4. The Restoration of Celia Fairchild by Marie Bostwick

Evvie Drake Starts Over meets The Friday Night Knitting Club in this wise and witty novel about a fired advice columnist who discovers lost and found family members in Charleston, by the New York Times bestselling author of The Second Sister.

Celia Fairchild, known as advice columnist ‘Dear Calpurnia’, has insight into everybody’s problems – except her own. Still bruised by the end of a marriage she thought was her last chance to create a family, Celia receives an unexpected answer to a “Dear Birthmother” letter. Celia throws herself into proving she’s a perfect adoptive mother material – with a stable home and income – only to lose her job. Her one option: sell the Charleston house left to her by her recently departed, estranged Aunt Calpurnia.

Arriving in Charleston, Celia learns that Calpurnia had become a hoarder, the house is a wreck, and selling it will require a drastic, rapid makeover. The task of renovation seems overwhelming and risky. But with the help of new neighbors, old friends, and an unlikely sisterhood of strong, creative women who need her as much as she needs them, Celia knits together the truth about her estranged family — and about herself.

The Restoration of Celia Fairchild is an unforgettable novel of secrets revealed, laughter released, creativity rediscovered, and waves of wisdom by a writer Robyn Carr calls "my go-to author for feel-good novels.” 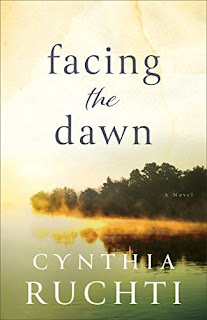 5. Facing the Dawn by Cynthia Ruchti

While her humanitarian husband Liam has been digging wells in Africa, Mara Jacobs has been struggling. She knows she's supposed to feel a warm glow that her husband is nine time zones away, caring for widows and orphans. But the reality is that she is exhausted, working a demanding yet unrewarding job, trying to manage their three detention-prone kids, failing at her to-repair list, and fading like a garment left too long in the sun.Then Liam's three-year absence turns into something more, changing everything and plunging her into a sunless grief. As Mara struggles to find her footing, she discovers that even when hope is tenuous, faith is fragile, and the future is unknown, we can be sure we are not forgotten . . . or unloved.With emotionally evocative prose that tackles tough topics with tenderness and hope, award-winning author Cynthia Ruchti invites you on a journey of the heart you won't soon forget.

What about you, friends? What are you reading right now? What's on your TBR pile?