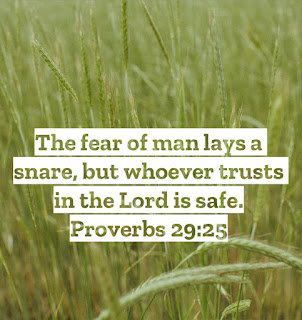 In the book Stop Calling Me Beautiful, Masonheimer reminds us that this verse doesn’t say the fear of man is a snare, but rather the fear of man lays a snare. She calls the fear of man the trapper, not the trap. I’m paraphrasing here, but she basically says the trapper deceives, hides the trap, makes it blend into the surroundings, feels normal so you’ll feel safe to walk in that direction.

The fear of man is a burden I don’t want to carry anymore. It has weighed me down in some seasons more than others, but I want to be free. Don’t you?

What’s the opposite of being taken in by the trapper? Trusting the Lord. That’s how we stay safe.

As an example, I’m thinking about my writing, my platform, and the whole process of trying to gain the approval an editor.

I changed genres from what I first set out to write because someone in the industry suggested it—telling me my genre (women’s fiction / contemporary fiction) won’t sell and suggesting instead that the manuscript be something else. So I re-wrote that entire book to make it a romance because romance sells.

Fast forward seven years, and I just finished re-writing that book (again) back to women’s fiction because when I returned to God’s words to me, what He has spoken over me about my writing, I remember that He called my work to be real and relatable, to write about people, families, marriages that are authentic and flawed but so capable of being redeemed.

Of course, I love a good love story—and my work will probably always have some element of that because the gospel is the greatest love story ever written. But my heart has always been to write about women and overcoming their struggles within themselves and in all relationships—marriage, family, friendships.

Maybe this is a normal concern for writers who are getting started, but I have felt so trapped by these fears for a while, and I think making the decision to re-write my manuscript last fall was my first step toward freedom.

But the fear of man is not just about my writing. I’ve entered a new season with a renewed desire to deepen the friendships I have—to invest in new ones and to return to being real and vulnerable with the old ones.

No area of people pleasing / people fearing affects me more than communities of women. Friendships.

This is not to say I can’t fall into the trap with my family or in my marriage, but there’s a certain level of security there, right? I have confidence in their love for me, no matter what I do or say.

The commitment to be friends—and stay friends—is not as certain.

And that uncertainty makes me feel insecure.

And insecurity makes me want to control.

And sometimes control looks like not engaging, because I’ll just get hurt.

I like how it feels to be on the inside, but any reminder that I’m really just on the fringe makes me feel insecure. And the people I work the hardest to please and worry the most about disappointing are often not even really my friends. They’re acquaintances at best and strangers at worst.

I can sometimes get so caught up in wondering and trying to anticipate what other people want or think that I lose sight of what I even want or think.

And even more muddied from what I want or think becomes deciphering what God wants or thinks about me.

Isn’t that what happened with my writing and the back-and-forth genre struggle?

Isn’t that what happens when I shrink back from other women, when I choose not to engage, when I avoid getting hurt?

But if I listen to what God thinks about me, I would know He’s already pleased. I have his full approval. I’m accepted and loved. I have need of nothing else because nothing else can really top that.

The fear of man lays a snare, but I choose not to let the trapper trick me. Not this year.

I will trust the Lord. I will believe what He says about me. I will listen for his voice above the noise.

What about you, friends?

P.S. If you missed Part One, check it out here.